There must be people reading this blog!

Today I was informed that my blog has been picked as one of 25 CRM blogs in the world by Dynamics101.com.

It's very nice to see that there are people reading what I write, even though I sometimes get a bit to emotional to be able to see how the language I use actually looks.

Looking at the rest of the list and the names ehind these blogs, I am in a very nice company with a lot of knowledge and I am very grateful to be mentioned among these very experienced people.
You can find the entire list at http://www.dynamics101.com/2014/09/top-25-dynamics-crm-sites/

Among the 25 blogs listed is also my good friend and boss' blog. Congratulations to Gustaf Westerlund too!

Ok, this is something that I get very annoyed about. Microsoft has actually locked down the display names of some fields in Dynamics CRM 2013 so you can't edit them, from the GUI.

A friend of mine asked why on earth you aren't allowed to change the display name of the parentaccount field on the opportunity entity. I laughed at him saying that he wasn't allowed to do that since he could then ruin the system. 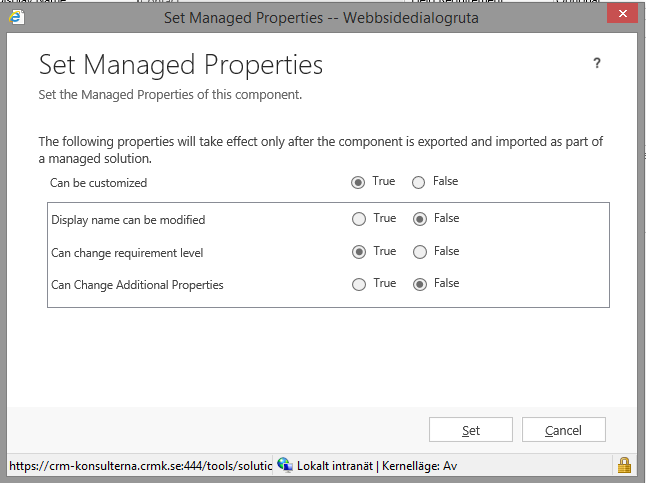 Right, this means someone actually has done some sort of thinking here and set the "Display name can be modified" to NO, ON A STANDARD FIELD. If this would have been an ISV product I would have understood that you don't want someone fiddling with your product. But why on earth would Microsoft want to stop you from changing the DISPLAY NAME of a standard entity in a product as CRM where the customizationability (is that even a word?) is a big priority.

If you agree, please vote on https://connect.microsoft.com/dynamicssuggestions/feedback/details/996226

There is a work around, and that is to edit the translation file, so, yes you can change the display name anyway. I wonder if that makes it possible to edit display names of all fields, even ISV product fields. That is another issue but I'm not quite as annoyed about a leak in this thoroughly broken mess.

I have just patched some servers to SP1 for Dynamics CRM 2013 and as usual it went smoothly, well most of it. The Language pack for Swedish had some hickups and as usual the error messages are far from brilliant.

So patch Thursday was the agenda last evening and the main show was SP1 for CRM 2013, a bit late perhaps but given the update rollup mess of 2011, I might even advocate it was quite early.

Some background, the server that gave me the issue is a lab server running on Windows Server 2008R2 and has been upgraded from CRM 2011. When I did the upgrade from 2011 I uninstalled the MUI, which was Swedish/1053, and installed the MUI of CRM 2013, however the update rollups of the MUI was still present in the list of installed updates, even though the product was uninstalled. That is perhaps not the most pretty uninstall job I've ever seen.
When I installed the CRM 2013 MUI everything was working so I didn't think much about it, perhaps it was just a text record still present was my thought. When I was installing UR1 and 2 for CRM 2013 everything was working too, so no biggie.

However, last night the MUI installation of CRM 2013 crashed with the following error message: The given key was not present in the dictionary.

Googling this gave me not so much but there was one link to Microsoft's forums saying that the problem is a registry entry in HKLM/Software/Microsoft/Windows/CusrrenVersion/Uninstall/KB29411390_Mui_1053, which indeed was where the install log was pointing.
To start with, this is sort of funny considering that the SP1 is that very KB, so what is going on here?

The solution in the forum post was to reinstall the server since they didn't want to mess with the registry. That was not perhaps what I was looking forward to be doing so the hunt continued.

Considering that the issue seemed to have something to do with uninstall information I started by trying to reinstall the MUI SP2 if something had gone wrong there. That repair went smoothly with no issues. Next stop was the remaining SP of the CRM 2011 MUI, which had not been possible to remove earlier since the product had been removed.

Despite this I tried to uninstall it and to my great surprise it actually started doing something, which would take 30 minutes to complete. After a bit of waithing the UR was uninstalled with the popup message sayin "repair complete", oh well, it's gone now. Looking at the list of installed programs, there was a CRM 2011 MUI present not, so I uninstalled that one too.

After this operation, the install of  CRM 2013 MUI SP1 went as expected. Now I'm not very impressed by the uninstallers of Dynamics CRM, why isn't the rollups uninstalled with the program? The next question I have is why did this become an issue with SP1 but not with UR1 and 2? Lastly how come I was able to uninstall the UR of CRM 2011 all of a sudden and that it seems to have reinstalled the MUI while I was uninstalling.

Maybe this can help someone out there.