Mapping from opportunity through quote to salesorder

I've run into this issue a couple of times now so I thought it might be a good thing to collect what I've found about this issue. If you noticed that the order of the lines from an opportunity isn't copied from opportunity to quote and then on to salesorder.

This probly ranks among the sort-of-supported, but it's not any SQL hacks involved so I think it's sort of kosher.
All info is taken from https://community.dynamics.com/crm/f/117/t/140108 which in turn points to a bllog. This is a  summary of that.

First, run the following SQL command on your organisation db:

SELECT  EntityMapId
FROM    EntityMapBase
WHERE   TargetEntityName='quotedetail' AND SourceEntityName='opportunityproduct'
That will give you a guid to a mapping page which is interesting. When you want to do the same thing on quote to order mapping, change the target to "salesorderdetail" and the source to "quotedetail".

Now we use the guid provided by the nice database in the following URL: http://[x]/Tools/SystemCustomization/Relationships/Mappings/mappingList.aspx?mappingId=[y]. Change [x] to serverurl and organisation (myserver/testorg/) and the [y] to the guid just found in the database

This opens a mapping page where you can insert mapping from sequencenumber to sequencenumber and the products will be in the same order in both records.
I'm pretty much posting this to make it easier for me to find, maybe it's good for someone else too. Again, I haven't found out how you did this, just to make sure.

Exchange rates per record, or any color you like

Since I started working with Dynamics CRM the "issue" of one exchange rate per currency has come up a couple of times. How do you handle it, when do you update, what do you do if you want to...
A customer of ours wanted to have an exchange rate per record so how can you fix that and still be able to use the rest of the functionality.

This is by no means THE solution but it is one. I was fiddling around a bit with CRM when I got the problem. Could I write directly to the base currency, was there any other way around the issue, should we use some other field?

I started looking on the web for solutions and I found this short blog http://www.crmsoftwareblog.com/2012/11/dynamics-crm-2011-multiple-exchange-rates-for-currencies/ which pointed be in the direction of the RetrieveExchangeRate message. Having no idea, I had a look in the plugin registration and yes, there was indeed still such a message 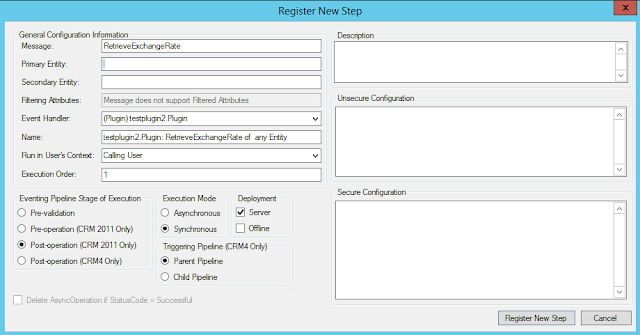 (Yes, I'm still using the 2011 plugin registration tool, it works and you can store multiple connections...)

So, having found this message and having no idea how to use it, I didn't find anything about it in the SDK either, so I started out with a pretty empty plugin which was called by the message which I step debugged in VS to see what was going on.

It would prove to be fired before everything else and the calling object was present as context.ParentContext. After that quick test I started getting stuff together. So, this is what I did:

The usual suspects, set stuff up.

The magic happens with the output from the RetrieveExchangeRate plugin,
context.OutputParameters["ExchangeRate"] = exch;

"exch" is a decimal and you can set it to whatever you want and then CRM behaves as if it just retrieved the exchange rate from the system. Since we're using a plugin message and not doing anything realy naughty, more than pretty much a man in the middle attack on the system itself, this should be supported.